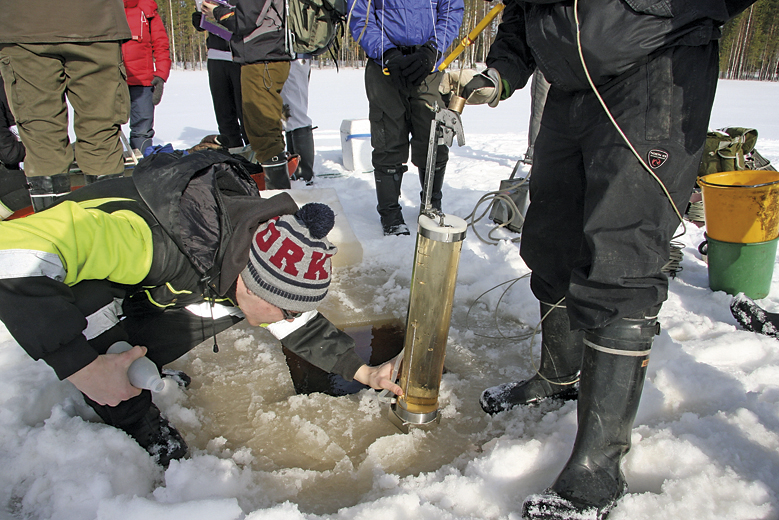 Snowchange coordinates now for five years the ecological restoration of Jukajoki river catchment area in North Karelia, Finland. The river and lake are located in the boreal zone of Finland.

The Selkie Village Council has now succeeded in securing funds, in the range of 200,000 euro, to proceed with next steps of this high-profile ecological restoration project.

Funders include the State of Finland, local municipalities and the city of Joensuu as well as private businesses, fishermen’s organisations, villages and land owners. The project is slated to finish in late 2017.

In concrete terms, during the next three years man-made wetland units and other restoration activities, including restoration of wetland marsh-mires, will be conducted. Aim is to allow the return of lake-bound, extremely rare Atlantic salmon stocks and lake trout as spawning species to the river by 2025. The watershed contains the man-made wetland unit “Linnunsuo“, 120 hectares, constructed in 2012-2013, that has become number 1 wader habitat in Finland – attracting rare species such as Terek Sandpipers. The Linnunsuo site is co-managed and hunting is allowed there in the Autumn.

The Jukajoki project has embraced, for the first time, the traditional knowledge of the local Finnish-Karelian Fishermen to be equally relevant as scientific data in restoration, monitoring and healing the river. This has not been done in Finland to this extent before. Restoration activities have attracted also a wide range of international attention. The Näätämö co-management project in Sámi area of Finland follows in dialogue the Jukajoki activities. Similar watershed restoration has emerged in Kuivasjärvi, West Finland. The Jukajoki case has been also featured in workshops in Canada as a model of boreal restoration project in 2013. In November 2014 the Indigenous Australians from Yarrabah, managing the East Trinity Reserve in Queensland, entered into a dialogue for cooperation in 2015 regarding similar restoration needs in acidic soil catchment areas.

The river project received accolades from the UNEP in July 2014, several English -language peer-reviewed papers have been written about the river, an U.S. film crew is to release two films about the situation in Autumn 2015, and major international newspapers, such as the Foreign Policy in Washington, D.C., USA have referred to the project in 2014. All in all, already 2,7 million euros have been spent on the project since 2010. The project represents a new style of ecological restoration in the boreal zone, that fully embraces local peoples traditions, uses of the waters and lands and rights as a key factor in restoration and combines them with the latest ecological science.