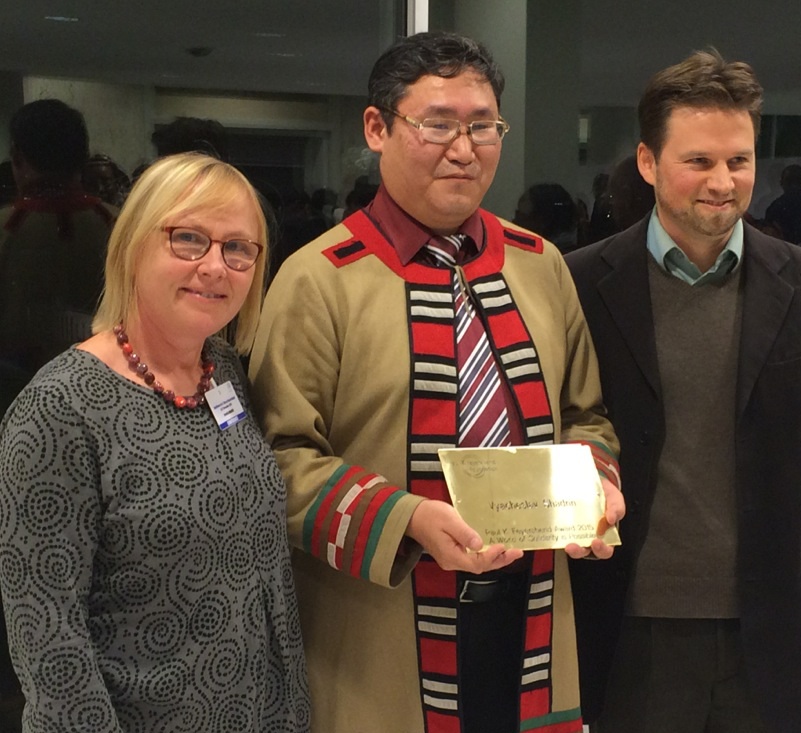 Pernilla Malmer, Vyacheslav Shadrin and Terence Hay-Edie with the Prize, 2015.

Chief Vyacheslav Shadrin of Russia is one of the six laureates of the 2015 Paul Karl Feyerabend Award.  In a small ceremony at the UNESCO premises on November 27, in Paris, Chief Shadrin received the Award from the hands of Pernilla Malmer of Sweden, one of the Nominators of the PKF Foundation. The P.K. Feyerabend Award—“A World of Solidarity is Possible” is offered to mark exceptionally successful work favouring solidarity within or between communities. The prize, which comprises a plaque and a financial sum, acknowledges and encourages remarkable accomplishments that represent true sources of inspiration. The Paul Karl Feyerabend Foundation is based in Switzerland and has supported 40 community solidarity initiatives and offered the Award 21 times since 2006.  Chief Shadrin is offered one of the 2015 PKF Awards ex-aequo with Tapio Kalli of Finland.

Beyond the concrete recognition of the accomplishment and its possible consolidation by means of the resources provided to the project, the  goal of the Paul K. Feyerabend Award is to spread information about the feasability and the results of solidarity centered projects. This is why the prize is awarded during a public ceremony.

Chief Shadrin is Chairperson of the Yukaghir Council of Elders of the Republic of Sakha-Yakutia, in Siberia, Russia. As leader of his own Yukaghir indigenous people and Vice President of the Russian Association of Indigenous Peoples of the North, Siberia and Far East for Yakutia he has systematically advanced the culture of the indigenous peoples and communities of the Far East of Russia since the last days of the Soviet Union.

Throughout the 1990s and 2000s, Chief Shadrin has been instrumental in supporting Yukaghir’s traditional culture and language issues and, since the new millennium, has been constantly on the move to promote the larger movement of indigenous peoples, including Even, Evenk, Chukchi, Dolgan and Yukaghir peoples across the region in Yakutia, Chukotka, Magadan and Khabarovsk. Tirelessly travelling every week to distant indigenous communities in the tundra and taiga regions, Chief Shadrin learns about the problems of such communities and takes their issues forwards to the authorities and responsible bodies. He has provided leadership to international projects that dealt with issues as diverse as conservation of biodiversity, traditional knowledge, adaptation to climate change, solar energy and reindeer herding. This included the UNEP-GEF ECORA project in Lower Kolyma. Currently, he coordinates regional work with the Snowchange Cooperative, with whom he is engaged in numerous initiatives dealing with the preservation of indigenous culture, language and traditional knowledge.

The survival of Indigenous peoples of the Arctic hinges on a fine balance. Central to this survival is the idea of the preservation of traditional mindset and the nomadic lifestyle of reindeer herding. It still survives in the extremely remote Siberian communities – the homeland of mr. Shadrin. In all other parts of the North the Indigenous communities have switched, often due violent, imposed reasons, to a sedentary lifestyles and communities.

The nomads travelling in the tundra therefore are a remarkable testimony to the adaptation and survival capacities of the Indigenous peoples in one of the harshest climates of the world – often temperatures drop to -50 C in the camps mr. Shadrin visits and works in. These nomads of the Arctic can provide us with crucial new observations and traditional knowledge of the way the North changes if these lifestyles can survive the 21st century.

Chief Shadrin has emerged over the past 15 years also as a global spokesperson for the Indigenous societies of Siberia and the larger Snowchange network of Indigenous and local communities, of which he co-leads as a regional coordinator.

Chief Shadrin meets often with Heads of State, such as Lieutnant-Governor of British Columbia, Canada, Prime Ministers and dignitaries of the Arctic Council, in his attempt to advance the cause of the Indigenous Peoples of the Arctic. He is driven by the words of one of his mentors, the Even Nation leader and scholar of Siberia, the late, great Vasilii Robbek: “The crucial question for the nomadic societies of Siberia this century is – to be or not to be?” The answer rests on the capacity of these communities to adapt and maintain their cultures on their terms, and Chief Shadrin is the one of the best people to assist them do that!

Chief Shadrin, who has published in international journals on the questions of traditional knowledge, is an accomplished historian and researcher with the Institute of Humanities of the Russian Academy of Sciences. Terence Hay-Edie of Switzerland, the other Nominator of the Paul Karl Feyerabend Foundation who introduced the work of the Foundation at the ceremony, has praised Chief Shadrin for his long-term commitment to maintaining alive communities through language and traditional knowledge.  “It is this kind of patient and courageous work”—he said— “that bonds communities together, makes life worth living and links peoples to their environment in positive and constructive ways.”

Doctor Elias Lönnrot, compiler of the national Epic of Finland “Kalevala”, identified lake Kuivasjärvi catchment area to be amongst the ‘last’ in Western Finland where the traditions and endemic beliefs of the Finnish culture survived well into the 1800s. Tapio Kalli, who was still brought up following the remnants of the local hunting and fishing culture, has worked tirelessly throughout his life to restore the ecological status of the Kuivasjärvi watershed. The watershed had been heavily damaged between 1950s and 2010s mainly due to ditch drainage for state-sponsored and private forestry, but also, and most importantly, because of the expansive and aggressive peat mining and production all throughout the catchment area.

Mr. Kalli has worked by applying his traditional local knowledge as a hunter, forestry specialist and fisherman, by participating in restoring marsh habitats, by encouraging different parties to conserve the last old growth forests and by revitalizing winter and summer communal fisheries with nets, fish traps and seining. He has also opened a wide-ranging dialogue with scientists to investigate the water quality, monitor damaged sites, restore the habitats of extremely endangered ptarmigan stocks (the southern-most found in Finland) and construct artificial nests for the Osprey populations. He has bravely confronted the VAPO state peat production company to prevent and heal the damages to his lake.

Mr. Kalli’s work has received international attention. The US-based influential journal “Foreign Policy” had heard of his work combining traditional knowledge, science and fishing activities to restore Europe’s boreal lakes. They reported about the fact that a major international review of the state of environment in boreal Finland had included the previously-little known perspective of traditional villages and fishermen. This made Mr. Kalli even better known, a source of debates internationally and in his own country. After decades of pushing for these issues to be recognized, his commitment to his lakes, forests and fish has finally broken through to widespread acclaim. Prize for mr. Kalli will be given out in a separate event at a later date.