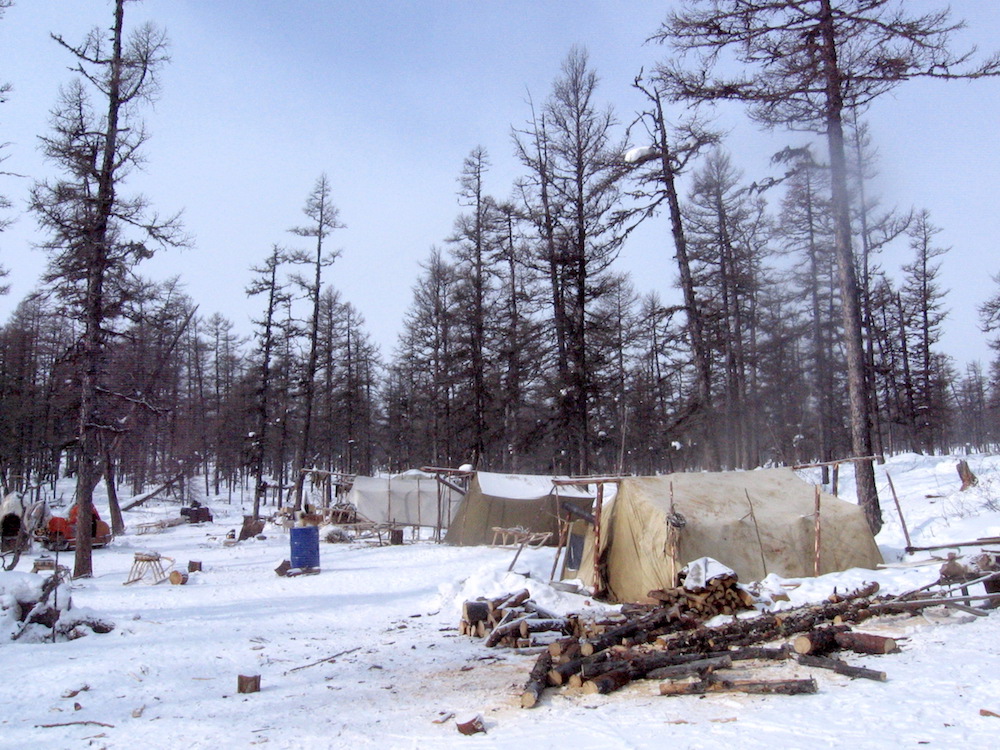 Firewood is being prepared in a spring Evenki camp within the taiga forest.

Snowchange and the ELOKA at National Snow and Ice Data Center release Snowchange Evenki Cultural Atlas, in the making since 2004.

Reindeer herding is more than a way of life for the Evenki of Siberia; it is the root of their culture. About 400 years ago, the Evenki saddled domesticated reindeer, a species well adapted to the rugged mountainous taiga forest, allowing them to overcome previously impenetrable lands. Today, about 38,000 Evenki live across 7 million square kilometers (5.7 million square miles) from central Siberia to the Pacific Coast.

Colonizing vast lands isolated the Evenki into subgroups with disparate ethnic and cultural practices. While some Evenki have maintained ancient ways of life, others have transitioned under social and environmental stresses, losing their Evenki identity and language. Under Soviet rule (1917 to 1991), mandatory registration of these nomadic people required boarding school education and enforced Russian learning, which gradually eroded the Evenki language. Currently there are only about 7,000 Evenki speakers. One town, however, held fast to its traditions.

“Iyengra is known as a cultural heritage area, preserving the way of life and language of the Evenki peoples of Sakha-Yakutia,” said Tero Mustonen, from SnowChange Cooperative, which works closely with local and Indigenous groups in the Arctic. Iyengra, a small rural community of about 1,000 inhabits, sits on the Yiengra River, north of Mongolia. “While the reindeer herds are out in the taiga, most of the children and elders stay in Iyengra.” That is why Iyengra was chosen to host the Evenki Atlas—the first online cultural atlas of Indigenous Knowledge from Siberia.

A place to come home to

The Evenki Atlas bridges Traditional Knowledge with the challenges of present day by embracing cyber technology. “Evenki youth are immersed in this great tsunami of technological devices,” Mustonen said. “That’s the world we live in, but the atlas is a concentrated effort to bridge that gap by using oral histories, videos, maps, placenames, and storytelling. So this will be one tool to preserve the traditional Evenki culture.”

Vladimir and Viktor, reindeer herders and hunters, rest within an Evenki tent.

The atlas has been fifteen years in the making. The Evenki co-researchers first approached SnowChange in 2004. Since then they have documented Evenki oral history and other cultural materials, while maintaining all property rights with the Evenki individuals who shared their knowledge.

The Evenki Atlas is based on cyberinfrastructure that a NSIDC project, the Exchange for Local Observations and Knowledge of the Arctic (ELOKA), has been adapting since 2008 to support community-led research and knowledge documentation projects across the Arctic. 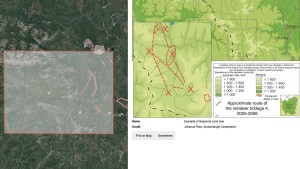 The atlas contains reflections on seasonal land uses of the Evenki.

“We are very thankful to ELOKA that this Atlas is easy to update,” Mustonen said. “The Evenki are still a distinct culture. The atlas is one tool of many to orient themselves in this new century.”

The primary audience for this atlas is the Evenki. The current 1.0 version is in English, but a Russian and then Evenki version will follow. The Evenki will also have control of what to make public versus private through an internal login system. For instance, there are hunting and gathering secrets that the Evenki only want to share with other Evenki.

The intention, therefore, is for the atlas to be a living record of change. 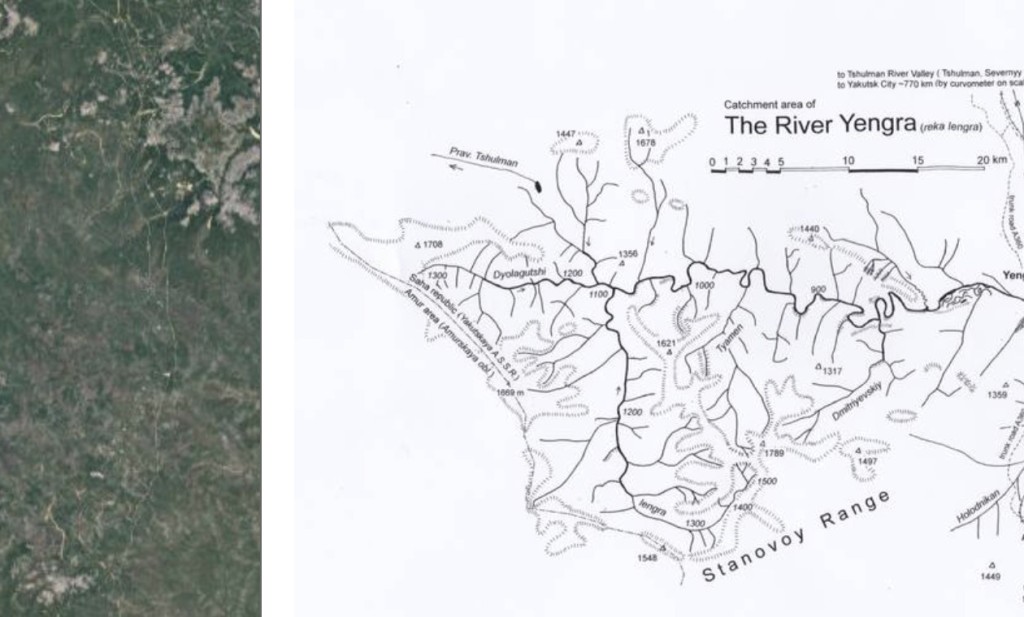 A sample from the atlas.

The Evenki Atlas contains five modules, each dedicated to a key component of Evenki life and culture. One module commemorates influential people of Evenki culture, such as Martiona Kulbertinova, who the Evenki consider to be “one of the most powerful Evenki ever known.” She was thought to be at least 115 years old when she died in 1996. As a spiritual leader, cultural keeper, and healer, her words still resonate. One of her famous quotes post the Soviet era responded to the notion that the Soviets had given the Evenki everything: Kulbertinova said, “I think they forgot the most important of all, the spirit of a human being.”

The Evenki are animistic, believing that everything in nature, seen or unseen, possesses a spirit: rocks, soils, rivers, trees, and animals. The module on placenames serves to acknowledge these spirits and honor their significance by naming these key landscapes. The oldest placenames apply to water bodies and contain descriptions of their different elements and characteristics, such as flow, depth, sinuosity, and crossing safety. 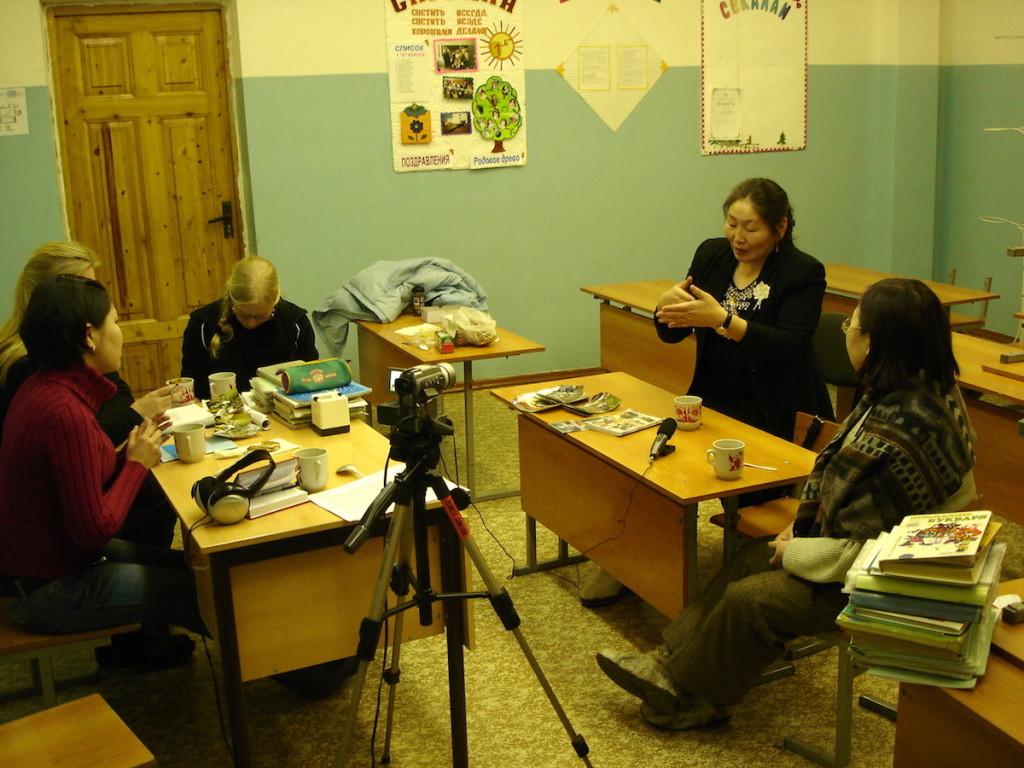 SnowChange speaks with late Elder Oktiabrina Naumova, who shared her oral histories in 2006 with the team. SnowChange has also included gender-specific Evenki knowledge since the Evenki women are considered the keepers of the taiga culture.

The other modules include for example Evenki and the Cosmos: Views on Customary Law and Sacred Traditions; Evenki Knowledge of Weather and Observations of Ecological Change; and Keeping Taiga Knowledge: Views for the Future.

While the atlas is imbued with Elder knowledge, there is no limit to its direction. “The loss of key people in the village has brought a lot of sadness. This is one of the biggest challenges: so much has been lost,” Mustonen said. Through the help of ELOKA, however, the mechanisms are in place to update, maintain, and expand the atlas to reflect where the village might want to go and who the Evenki want to be.

“This conversation is quite unified. The elders of the 1920s and 1930s, when they have gone, the Indigenous cultures of the Arctic will face tremendous questions of how to preserve their language, important cultural concepts, and land uses,” Mustonen said. 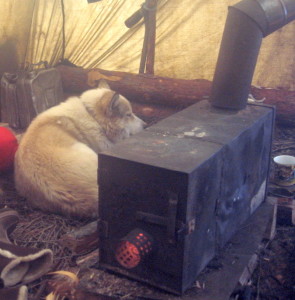 Early morning in the camp.

Seasons and weather determine all aspects of nomadic life in the taiga forest. Cradled in a valley of shallow rivers, Iyengra is surrounded by mountains and large hills. Winter temperatures plummet to -50 degrees Celsius and below. Summers are hot. This land of extremes offers little room for error. Climate change is threatening to upset this delicate balance further.

The effects of climate change are more pronounced at the poles. For example, in November 2013, rain on snow in Russia’s Yamal Peninsula formed a several-inch thick layer of ice, smothering pastures and starving 61,000 reindeer. Mathematical climate models predict such rain-on-snow events will increase in frequency as the century continues.

Destructive ecological activities in the last fifteen years have also weighed on Evenki culture. Mineral resource and fossil fuel extraction, timber operations, and road constructions have destroyed essential pastures and grazing grounds for reindeer herding. When significant land disruption first happened in the 1970s to accommodate the first railroad track through the taiga, the affects were severe. As is written in the Ecological Change module:

Local people related that when the first tracks were constructed, several young reindeer herders faced extreme pressure, some even committed suicide. They could not come to terms with the imposed dramatic changes to their lands and lives. They could not find any use for their traditional skills and values as the whole universe around them had been turned upside down.

The Evenki see the atlas as a tool for cultural preservation and a way forward through all the challenges yet to come and have been anxiously awaiting its release. “No one knows the future—if nomadic lifestyle will end or continue,” Mustonen said. “It may be a mixture of both, but we will have the atlas to convey the message of how things used to be from changes in the forest and climate change over a 100 years to cultural adaptations.” 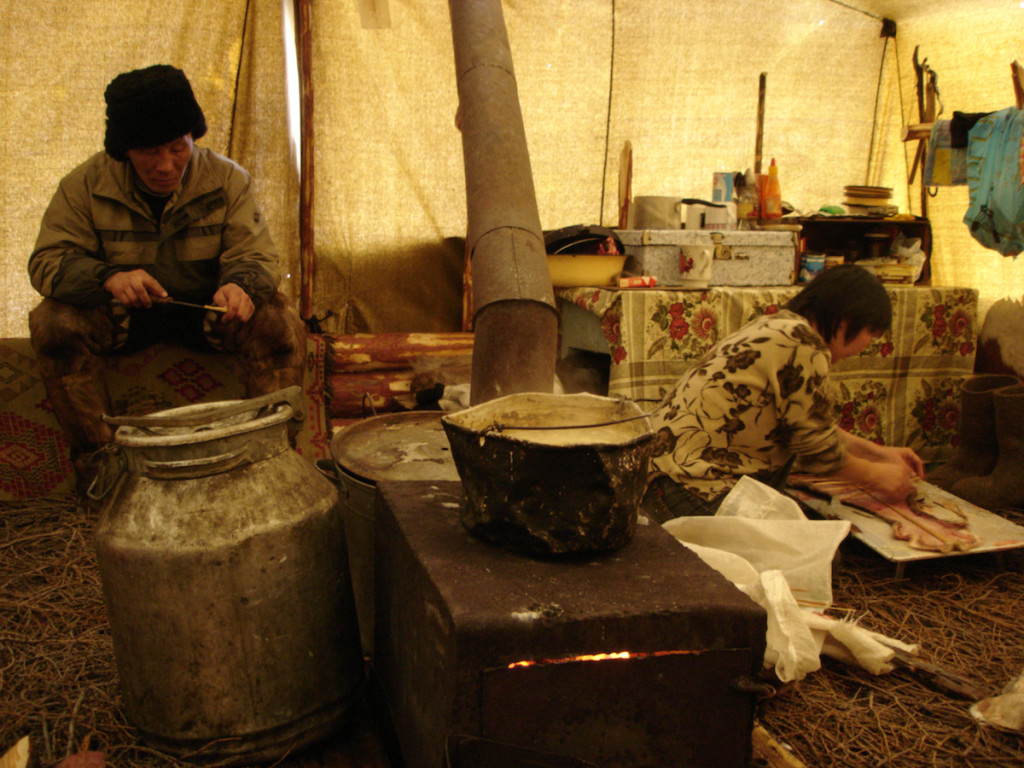 Marina tends to reindeer skins (right) and Valeri fixes a sled runner. Valeri and Marina live a nomadic lifestyle all year round with their children.