Posted on September 4, 2019 by Snowchange

Wendat Professor Georges Sioui and a Snowchange steering group member, who is also one of the most recognized Indigenous scholars and defenders of Indigenous rights in Canada and globally, releases a new book. 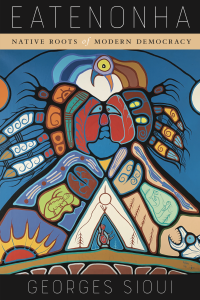 Eatenonha is the Wendat word for love and respect for the Earth and Mother Nature. For many Native peoples and newcomers to North America, Canada is a motherland, an Eatenonha – a land in which all can and should feel included, valued, and celebrated. In Eatenonha Georges Sioui presents the history of a group of Wendat known as the Seawi Clan and reveals the deepest, most honoured secrets possessed by his people, by all people who are Indigenous, and by those who understand and respect Indigenous ways of thinking and living.

Providing a glimpse into the lives, ideology, and work of his family and ancestors, Sioui weaves a tale of the Wendat’s sparsely documented historical trajectory and his family’s experiences on a reserve. Through an original retelling of the Indigenous commercial and social networks that existed in the northeast before European contact, the author explains that the Wendat Confederacy was at the geopolitical centre of a commonwealth based on peace, trade, and reciprocity.

This network, he argues, was a true democracy, where all beings of all natures were equally valued and respected and where women kept their place at the centre of their families and communities. Identifying Canada’s first civilizations as the originators of modern democracy, Eatenonha represents a continuing quest to heal and educate all peoples through an Indigenous way of comprehending life and the world.

The book is available here.