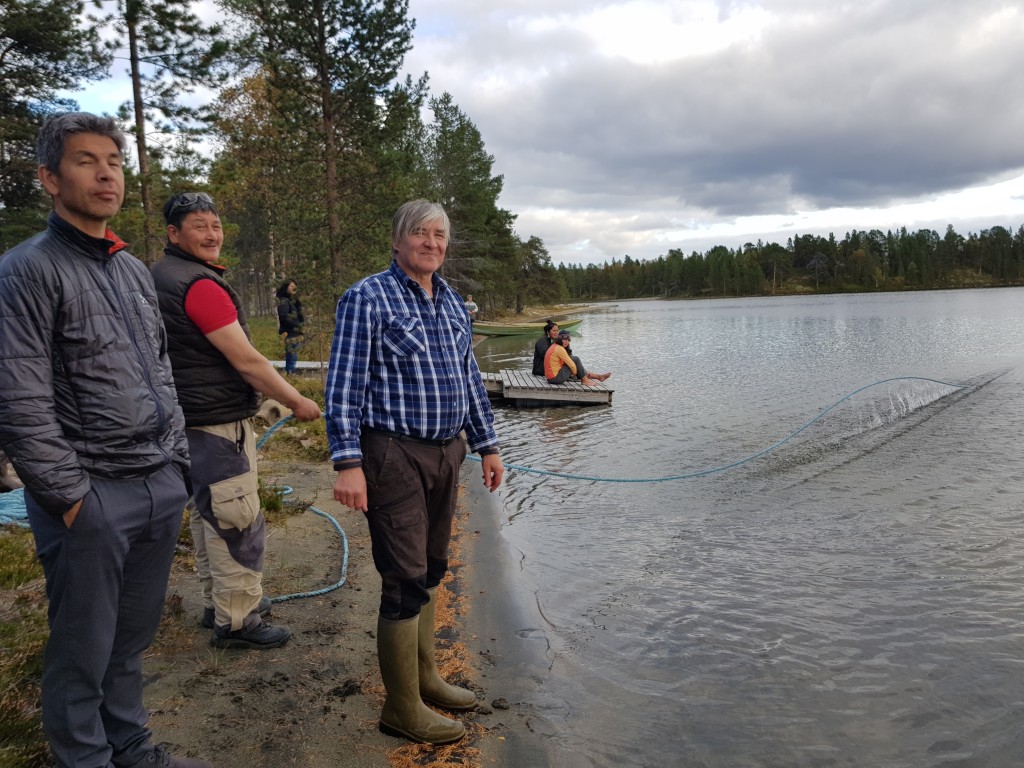 In this section you can find some of the people working for Snowchange Co-op and who coordinate our regional work (They can be reached at contact at snowchange.org):

Johanna Roto is the Snowchange geographer since 2000. She produces most of our maps for all of our community and science work. She is a human geographer who provides also statistical analysis and data visualisation. Her work experience includes activities in Nordic and Arctic peripheries, especially in Greenland and Faroe Islands. She is based in Stockholm, Sweden.

Kaisu Mustonen is the Head of the Biodiversity work under Snowchange. She is a human geographer who has been working in Alaska, Northern Canada, Greenland, Iceland, Sámi territories as well as Russian North since 2000. She specializes in gendered biodiversity knowledge. Currently she is working on the Interreg CHERISH project, Living Maps of the Skolt Sámi people and the Landscape Rewilding Programme. She lives in Selkie, Finland.

Tero Mustonen is the President of Snowchange at the moment. He is a winter seiner and adjunct professor (Human Geography). He leads the Kesälahti fish base in Puruvesi. He has been working in Alaska, Canada, Greenland, Iceland, Sámi territories as well as Russian North since 1999. Currently he is serving as a Lead Author for the AR6 of the IPCC. He is also the head of the village of Selkie, North Karelia, Finland.

Ari Parviainen is a bird specialist in Snowchange. Currently he is working on the Näätämö Co-management Project and the the Landscape Rewilding Programme. He is based in Joensuu, Finland.

Lauri Hämäläinen is a fisherman in Snowchange Co-op. He also has a degree of Bachelor of Environmental Sciences from the University of Applied Sciences Karelia, Joensuu, Finland.

Honorable Elder Eero Murtomäki is a nature photographer, author, film maker and hunter who lives in Petsmo close to Vaasa, Finland. He has been working in Snowchange since 2003. Currently a film tentatively titled “On the Wings of the Raven” about Eeros life and experiences is slated to be released in 2019.

Rita Lukkarinen is the layout designer of Snowchange. She has been designing all Snowchange publications since 2005. She is married to Eero Murtomäki and lives in Petsmo close to Vaasa, Finland.

Janne Raassina is a private entrepreneur and occasional staff member of Snowchange who is in charge of the aquatic restoration work and design in Snowchange. He is currently working on Kuivasjärvi and Jukajoki catchment area restoration projects as well as the Näätämö catchment area Skolt Sámi co-management work. He is based in Kontiolahti, Finland.

Jorma Mattson is a Licenciate of Sciences (Natural Geography) who has been working with Snowchange since 2006. Jorma has produced thousands of land use and occupancy maps and cultural mapping items from Sámi, Finnish and Siberian home areas. He lives in Turku, Finland.

M. Soc. Sciences (Env. Policy) Noora Huusari joined Snowchange as a staff member in 2020. She is responsible for the Koitajoki cultural heritage work and coordinates also the winter seining fish distribution and sales. Additionally she works in the summer time in the GHG measurements in the Landscape Rewilding Programme.

Christopher Madine is a biologist based in Newcastle, the UK. He has been working in Snowchange activities since 2007, including the solar panel and biodiversity work in Northeastern Siberia. Currently he is the Project Manager for the Interreg Europe project “CHERISH” in Snowchange.

Pauliina Feodoroff is a Skolt Sámi leader, playwright, film maker and an artist. She worked as the President of the Sámi Council 2007-2009 and is currently the Coordinator for Eastern Sámi territories of Snowchange work. She leads the Näätämö catchment area co-management work. She is based in Helsinki and in the Skolt home area.

Jevgenii Kirillov is an accomplished journalist and a regional coordinator of the Kola Sámi work for the Ponoi catchment area in Murmansk, Russia. He is also a member of Sámi Council.

Aslak Holmberg is a well-known North Sámi fisherman and a teacher from Utsjoki, Finland. He belongs to the Steering Committee. He is also a member of Sámi Council and Finnish Sámi Parliament.

Lloyd Haarala is an Anishinaabe Elder and knowledge holder who works with Corrections Canada. His father was a Finn and mother Anishinaabe. He resides in Victoria, British Columbia, Canada.

Victoria Hykes-Steere is an Inupiaq from Unalakleet on Alaska’s west coast. She works as the Assistant Professor of Alaska Native Studies at the Alaska Pacific University, Anchorage, Alaska, USA. She is the coordinator for Alaska for Snowchange.

Brie Van Dam is a Ph D from Fairbanks and an Ecologist, who provides statistical analysis for Snowchange science projects.

Curtis Rattray is a member of the Crow clan and Nalokoteen (end of the ridge nation) of the Tahltan Nation and his Tahltan name is ‘Ninth glun adz’. Curtis has extensive experience working in the aboriginal rights and title sector. Curtis has served as the elected Chairman of the Tahltan Central Council as the elected spokesperson for the Tahltan nation and is responsible for the representing the Tahltan nation on the reconciliation of inherent Tahltan rights and title issues.  Curtis coordinates Snowchange work in the Western North America, especially British Columbia and Yukon.

Chief of the Council of Yukaghir Elders, Vyacheslav Shadrin coordinates Snowchange work for East Siberia since 2004. Chief Shadrin has been working to accomplish a range of scientific and Indigenous knowledge projects in Kolyma and other regions of Sakha-Yakutia. Most recently he has been coordinating the solar panel electrification work in Lower Kolyma under Snowchange.

Tamara Andreeva, Ph D, is a Evenki scholar who has been coordinating the Evenki traditional knowledge and climate change work with Snowchange since 2005. She is an accomplished linguist and co-author of the upcoming Evenki Atlas in 2019.

Rimma Potpot is a language and cultural keeper of the Khanty people in Western Siberia. Advocate for the preservation of Khanty traditions and languages, she has been working to co-organise the Festivals of Northern Fishing Traditions with Snowchange since 2014. She is the coordinator of the Festival in 2020.

Pyotr Kaurgin is a Chukchi reindeer herder and regional coordinator for Snowchange in Lower Kolyma, Sakha-Yakutia. He is the leader of the nomadic community of “Nennen”.

Sutej Hugu is an indigenous leader from Taiwan, based in Pongso no Tao. He has been championing campaign to remove a nuclear waste repository that was “temporarily” established in Lanyu Island thirty years ago. He strives to work for federating the 748 tribal communities, whose indigenous territories almost entirely overlapped with state protected areas and national forests. Now, he is a Regional Coordinator of ICCA Consortium and has worked on the regionalization process that goes beyond the geo-political division to embrace the social-linguistic and bio-cultural context and connection for a global network of territory of life.

Victor Steffensen is an Indigenous Australian based in the Cairns region, Queensland, Australia. Through Mulong and Traditional Knowledge Revitalisation Project earlier, Victor has been able to support and foster the use of Australian Indigenous knowledge in science, education, land management and many other fields. Accomplished musician, artist, film maker, educator and speaker, Victor was raised on land and is skilled with the traditional skills and languages of his people.

Dr King is a Maori environmental scientist at the National Institute of the Water and Atmospheric research (NIWA) in Auckland, Aotearoa-New Zealand.
His work promotes cross-disciplinary and counter-colonial approaches to research that encourage plural knowledge development (and new narratives) about climate change, tsunami hazards and risk in Aotearoa-New Zealand. Dr King has worked with Snowchange since 2005.

Apanui Skipper is a Maori knowledge holder, carver, artist and accomplished orator of the Maori culture. He is a specialist on Maori knowledge of climate change and has been working with Snowchange since 2005.

Parani and Russell Gibbs belong to the Ngā Hapu o Poutama Maori community on the west coast of the North Island, Aoteoroa. Their community has worked with Snowchange since 2008. Currently in the tribal area rural and environmental restoration is a high priority in order to retain cultural integrity. One of the current goals is to formalize the Poutama Heritage Park across the tribal area.