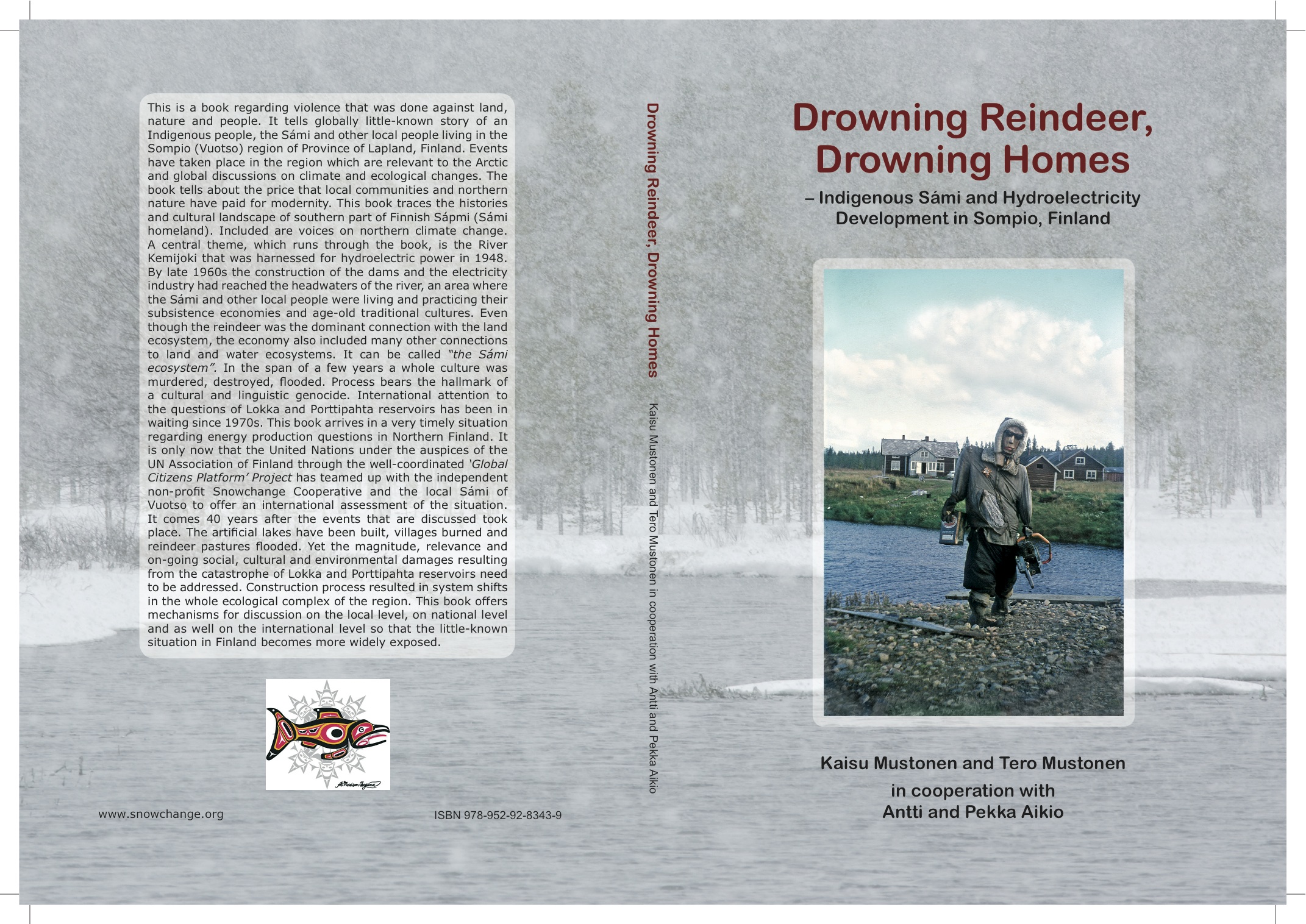 Cover of the book

This is a book regarding violence that was done against land, nature and people. It tells globally little-known story of an Indigenous people, the Sámi and other local people living in the Sompio (Vuotso) region of Province of Lapland, Finland. Events have taken place in the region which are relevant to the Arctic and global discussions on climate and ecological changes. The book tells about the price that local communities and northern nature have paid for modernity.

Cover of the book is available here.

This book traces the histories and cultural landscape of southern part of Finnish Sápmi (Sámi homeland). Included are voices on northern climate change. A central theme, which runs through the book, is the River Kemijoki that was harnessed for hydroelectric power in 1948.

By late 1960s the construction of the dams and the electricity industry had reached the headwaters of the river, an area where the Sámi and other local people were living and practicing their subsistence economies and age-old traditional cultures. Even though the reindeer was the dominant connection with the land ecosystem, the economy also included many other connections to land and water ecosystems. It can be called “the Sámi ecosystem”.

In the span of a few years a whole culture was murdered, destroyed, flooded. Process bears the hallmark of a cultural and linguistic genocide. International attention to the questions of Lokka and Porttipahta reservoirs has been in waiting since 1970s. This book arrives in a very timely situation regarding energy production questions in Northern Finland.

It is only now that the United Nations under the auspices of the UN Association of Finland through the well-coordinated ‘Global Citizens Platform’ Project has teamed up with the independent non-profit Snowchange Cooperative and the local Sámi of Vuotso to offer an international assessment of the situation.

It comes 40 years after the events that are discussed took place. The artificial lakes have been built, villages burned and reindeer pastures flooded. Yet the magnitude, relevance and on-going social, cultural and environmental damages resulting from the catastrophe of Lokka and Porttipahta reservoirs need to be addressed. Construction process resulted in system shifts in the whole ecological complex of the region. This book offers mechanisms for discussion on the local level, on national level and as well on the international level so that the little-known situation in Finland becomes more widely exposed.

Antti Aikio is a Sámi scholar focusing on the legal issues of the Arctic Indigenous peoples. He is connected with the University of Lapland in Rovaniemi, Finland.

Pekka Aikio (Reindeer herder, Ph D h.c., M.Sc.) is a longtime leader of the Sámi of Finland. He comes from the reindeer herding community of Sompio which was impacted by the reservoirs.

Kaisu Mustonen (Master of Social Sciences – Human Geography) is a specialist regarding the questions of biodiversity and Indigenous women in the Arctic. She has worked extensively in the North American Arctic, Iceland, Sámi areas and Siberia among the northern subsistence communities. She lives in the village of Selkie, North Karelia, Finland.

Tero Mustonen (Doctor of Social Sciences – Human Geography) is the Head of International Affairs of the Snowchange Cooperative based in Finland. He has worked in the North American Arctic, Faroes Islands, Iceland, Sámi areas and Siberia among the northern subsistence communities. Mustonen is a winter seiner and the head of village of Selkie, North Karelia, Finland.