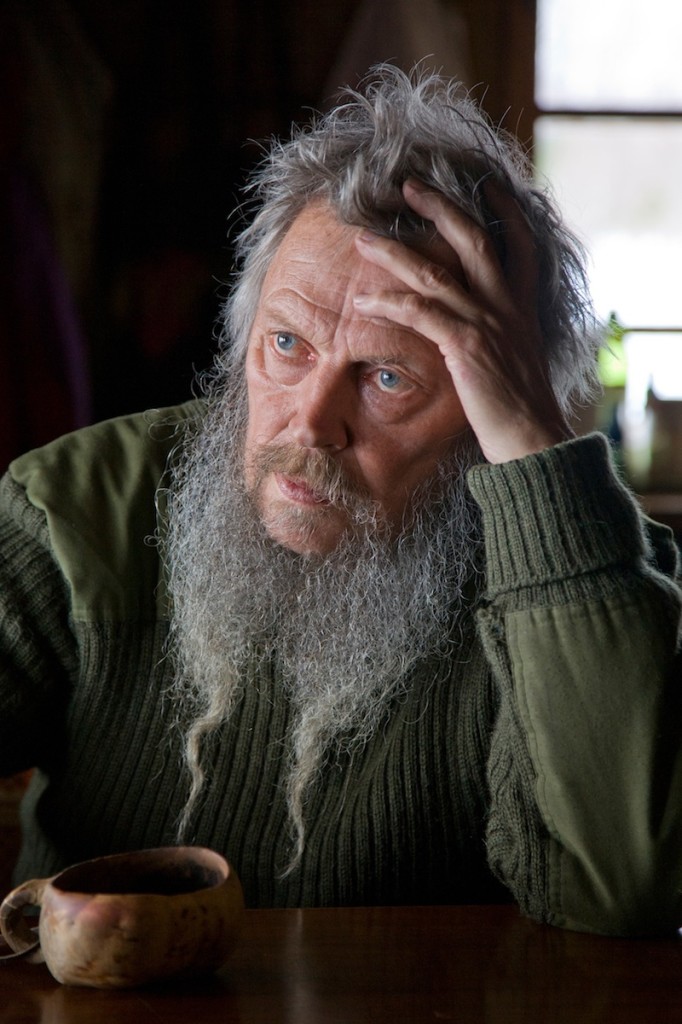 Finnish Eero Murtomäki, “Snowchange Elder in Residence”, originally from Vaasa, but now from the community of Mustasaari, Finland, turns 75 on the 10th January, 2018. His career, spanning almost 60 years, has included several nature photography books, films, work for nature conservation and achievements in the fields of intenational science and cultural diversity.

Murtomäki was born 10th January 1943. He has been a freelancer author since 1962. Themes emerging in his literary and photographic work include regions of Kvarken, Lapland and South Ostrobothnia, their species, territories and changes in nature.

All in all, Eero has released over 20 nature-related books as well as several TV- and feature-length nature films. He often refers to himself as a hunter, even though nowadays he hunts with a camera most of his time. Already in 1960s he was vocal opponent, both in his books and in the public, of the ditching of marsh-mires and large-scale forestry that permanently altered the forests and nature of Southern Finland.

Murtomäki was involved also with the restoration work of Sea Eagle populations of the Baltic. These large predator birds hit a rock bottom in late 1960s and early 1970s because of large amounts of DDT, pesticides and mercury in the food chain. Working with the WWF Sea Eagle team Eero was able to help return this magnicifient bird back into health – in 2010s already over 340 young sea eagles / a year are hatching. Eero says that this work has given his own life more meaning but the enemy this recovery faced is within us – the levels of consumption and ways of life that are out of place. 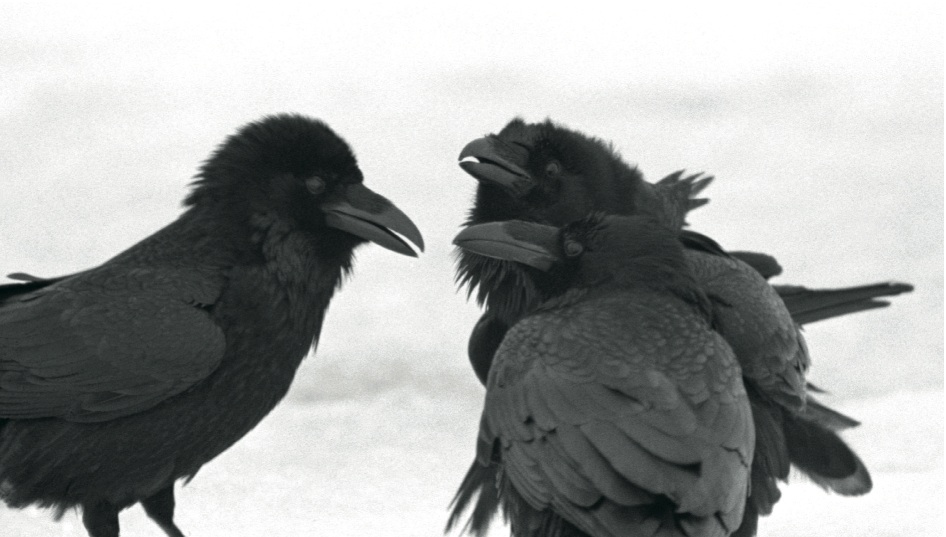 However, it is Raven that proved to be the guiding bird in Eeros life. Through the interaction that Eero and Raven have had over decades Finns have re-learned the earlier name of this bird: Kaarne (as opposed to the modern Korppi). Life with Raven and learning from Raven has been, according to Eero, his central theme all his life in all he does.

Eero is a recognized cultural keeper in international scientific and cultural work as well. He maintains excellent working relations with several Sámi communities in Vuotso, Inari and Utsjoki areas. Eero was centrally involved in the Snowchange award-winning publication “Eastern Saami Atlas” in 2011. For this, the Skolt Sámi awarded him as a part of Snowchange “Skolt of the Year” in 2011.

As a part of the Atlas work Murtomäki worked with Skolt Sámi knowledge holders to devise a new Indigeous and traditional knowledge method “visual histories” of environmental change in the Arctic. In March 2017 this method and results were included in a Science journal article, which is currently, according to Altmetric, at a position 61 of most influential Science articles of all time.

The uncompromising defender of nature and reformer of Forest Finnish traditions has had deep dialogues for example with the Siberian nomadic communities, Indigenous Australians and Alaskan Tlingit and Inupiaq peoples. In Aoteoroa, the Maori of Tongaporutu honored Eero back in 2009 by naming one of their children as a namesake.

Eero is the recipient of several awards domestically, including the “Environmental Award” by Alliance for Finnish Nature, a national organisation, back in 2012. A large circle of friends and partners supports the work he does. Several of the books and other projects have been accomplished because of the unwavering support of Rita, Eeros wife, who lovingly provides both the criticism and the greatest support for the work. 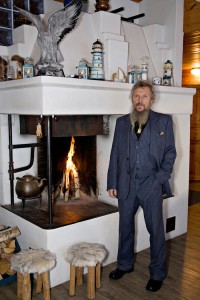 In summary, Eeros work looks to span a century. We should not ignore perhaps the most significant aspect of Eeros work. Through a life-time journey, helped by the Raven at his side, Eero has re-discovered and re-interpreted the knowledge of the Forest Finns, so destroyed and often considered lost forever. However Eero has never longed for some romantic, distant past, rather always bringing this knowledge forwards, with a punishing self-discipline for these times and for this society. He often says that if we cannot rediscover and re-birth the deeper connections with nature, each in our respective cultures and societies, humanity will suffer adverse consequences.

One of the deepest exchanges between Eero and an Indigenous scholar has been the dialogue with a Choctaw author and scientist Dawn Adams, Ph D from the Tapestry Institute, USA. As a part of the celebrations for Eeros lifework, Adams contributes this poem for their relationship as a brother and a sister, over oceans, but yet joined by the same struggles globally:

Who can say how it is?

Life is so mysterious.

I could never have guessed,

that a brother grew up with me

on the other side of the world.

Currents of the brightly dark waters

of a far northern sea

flow through his heart, throb in his veins.

Wood cracking in a hard frost

on nights milky with moonlight,

Clothe him body and soul

in a palette that only exists

when pines are so sharp in the nostrils

frosting his lashes as he stands drinking the wind.

Whereas  I am a child of the sun.

Hard granite and sharp gravel in tans and browns,

A translucence of quartz,

that skinned my bare knees as a girl.

Climbing rocks hot to the touch

and laying in warm satin puddles of sandstone

near stony paths where a river flowed once a year only,

of the day’s exhale,

the dry scale of a lizard’s tiny claws on the bark.

Silence a friend to us both.

And perhaps that is the thread

more closely than any DNA.

The spiraling master thread from which

we are each patterned,

cell by cell, soul by soul

at a level that can be seen by no microscope

but that the Land smiles to herself, weaving.

A thread first of silence,

a fullness of crystal

between land and sky,

filling the bowl of breath-taking space

that the call of a single bird from pine or from cactus,

the buzz of a fly hurrying past,

the low rumble a moose rolls deep in its throat,

the whistling elk beneath northern lights,

the distant snap of a twig,

the rolling crunch of stone beneath foot,

Calling the eye as well as the ear,

So that hearing becomes Hearing.

And one living moment bursts into flame,

leaping as fire from kindling aflare in the dusk

licking the wood with sharp pops of joy.

And then the track that is seen the next moment.

The slipping form that pauses to share a meeting of eyes.

Sharing a flow of Knowing

at once intimate and very much Other.

Each its own Self

as we are our own Selves,

a knowing gleam of eye,

a swaying step as in dance

As eyes shift, and gazes slide

but in a long instant that stretches out

And then ebbs away,

Water seeping into the print of a hoof,

the impression in moss-covered mud.

Wind sifting out and erasing

the scrape of a claw against sand.

down the hill, out in the forest.

A last plop of diving beneath water.

where we are never

This is the Life that breathes through us both.

Crystals of ice and of stone.

Shimmering heat in desert air and

shimmering lights on the sea.

The wind that blows clear ‘round the world

and is the living breath of the Earth

lifts us onto the balls of our feet,

draws us out into the places

that our own feet somehow remember.

So we dance with the world

and with one another.
Brother and sister.

In the thundering waterfall of silence,

whirling with the shimmering wind,

reaching out across the space between us

to touch fingertips in our passing,

before we spin away

into the shimmering air.